About us Characteristics of the Laboratory

Characteristics of the Laboratory

Brief Characteristics of the Laboratory

The Multimodal and Functional Imaging Laboratory (MAFIL) was established at Masaryk University within the scope of the CEITEC project in 2014-2015. It was fully open in spring 2015, after the installation of MR scanners. The electrophysiological area was open already in the course of 2014. Since 2016, the laboratory forms a part of the national infrastructure for biological and medical imaging – CzechBioImaging and also of the European multinational infrastructure EuroBioImaging. It is the first laboratory of its kind built specifically for research needs and offering an open access to all interested parties from both the Czech Republic and abroad. MAFIL presents an independent worksite belonging to the university institution CEITEC MU, organizationally incorporated in the Centre for Neuroscience. Since the laboratory works with human study subjects and considerably participates in medicinal research, it also has a status of medical facility (nevertheless, it does not perform standard medical examinations).

The laboratory’s history is associated with the long-term development of neuroimaging methods aimed to support neuroscientific research in Brno. The origins date back to 2000 when functional brain mapping methods with the use of magnetic resonance imaging (fMRI) were being introduced in cooperation among the Faculty of Medicine Masaryk University, St. Anne’s University Hospital and the Department of Computer Science and Engineering at the Faculty of Electrical Engineering and Computer Science at the University of Technology in Brno (nowadays called the Faculty of Information Technology). With the support of two neuroscientific research goals realized at the medical faculty of MU, it was possible to gradually overcome various technical difficulties, engage technically specialized colleagues in medical teams and develop other forms of cooperation within Brno (e.g. with the Department of Biomedical Engineering at the Faculty of Electrical Engineering and the Institute of Scientific Instruments at the Czech Academy of Sciences). Through time, more neuroimaging methods were added, such as simultaneous EEG-fMRI, diffusion-weighted MR, perfusion-weighted MR, computational neuroanatomy methods etc. Thus, the personnel and knowledge base were formed, ready to build the today’s laboratory. The idea of developing a modern neuroimaging scientific worksite appeared even before the CEITEC project preparation started, but it was CEITEC in particular, supported by the resources of the Operational Program Research and Development for Innovation, which finally enabled to bring the idea to life.

From the technologic point of view, the laboratory is divided into two main parts – MR imaging and electrophysiological methods. Nevertheless, both parts blend and complement each other because a major part of electrophysiological devices are compatible with MR and sometimes are used simultaneously during the MR measurement (e.g. EEG-fMRI measurement, heart activity measurement, breath curve, skin conductance etc. with MR) or are directly linked to it (e.g. magnetic or electric stimulation of brain centres and the related measurement with MR). An essential supplementary part is the data and computational infrastructure.

In terms of realized services and user support, it is possible to distinguish various categories or areas – see the scheme. The department of laboratory operation and technical support provides a basic laboratory operation (proper devices operation, their maintenance, technical support of projects, IT support, technical and safety trainings etc.). Nevertheless, the other area – a complex project and user support – is as important and comprehensive because in such a complex and multidisciplinary field, it is necessary to carry out many other activities apart from the data measurement itself. This includes assistance with project preparation, stimulation program creation for fMRI, implementation of algorithms for data processing, a complex systematic user training, transfer and implementation of new measurement methods, assistance with data processing etc. 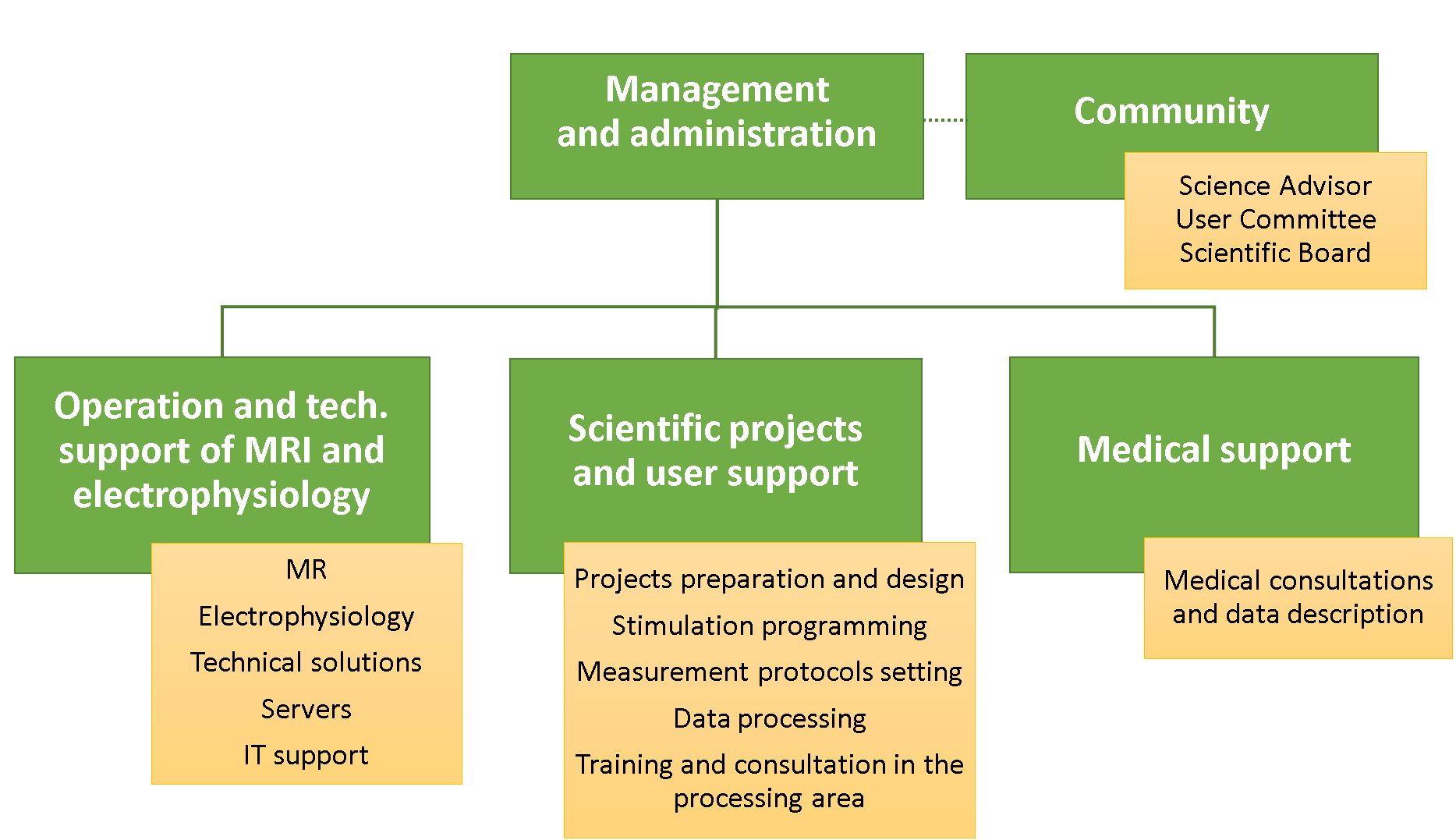